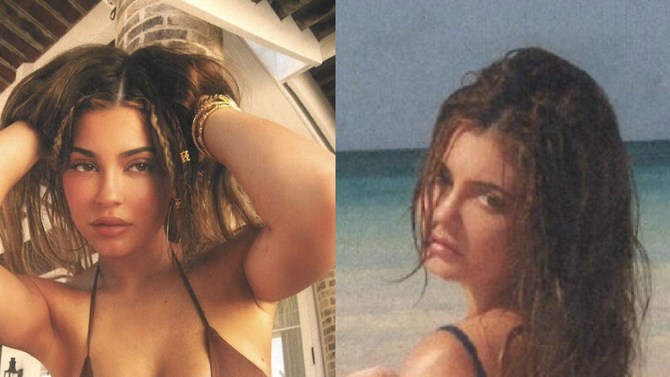 The Jenner sisters regaled their followers with photos of the two posing on the beach in thong bikinis.

In one picture, Kylie is sitting up on the beach and looking back at the camera while Kendall is lying down and soaking up the sun. 22-year-old Kylie showed her sandy bottom in the shot, leaving little to the imagination.

She captioned the photo, "Rise and f***ing shine," referring to the viral song that almost broke the internet. She quickly capitalized on the sensation, going so far as trademarking the phrase and even creating merchandise clothing.

The viral phrase will be used on clothing and cosmetics, and she plans to copyright the phrase "Riiise and Shiiine."

She is reaping profits for the song, and her shop’s $65 dollar hoodies with the phrase were recently sold out. She went viral after singing briefly to her daughter Stormi at her Kylie Cosmetics office.

Kylie has been sharing a lot of vacation pictures with her followers, including one of her cleavage in a brown bikini which had people wondering whether she had gotten breast implants. She posed with her finger on the bridge of her bra, and in another photo had her breasts pushed up using one arm.

She captioned it: "What's meant for me will always be," and added a heart emoji.