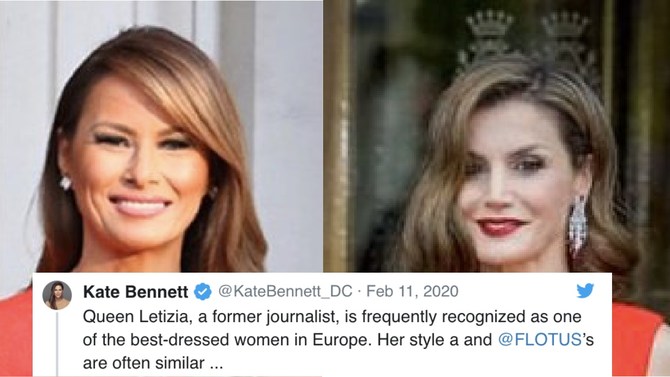 First Lady Melania Trump has weathered a number of criticisms that have been thrown her way since Donald Trump won the election.

She wrote, “Melania Trump is definitely a very beautiful woman. She has a gorgeous, toned body and beautiful skin. Of course it’s fairly easy to achieve both when you’re married to a billionaire and maintaining your appearance is your only job,” adding, “Moving on, outside of being a beauty, Melania is also a copycat. I’m serious, Melania has been caught multiple times stealing the words of others.” Jefferson shared pictures of Melania wearing a dress similar to that of the Queen of Spain. One photo, from CNN correspondent Kate Bennett, shows the two ladies wearing red gowns. While Melania and Queen Letizia’s gowns were not made by the same designer, they were very similar. Queen Letizia was photographed in the dress on April 29, 2017, and Melania wore hers on June 4, 2019.

Another picture shows both Melania and Queen Letizia wearing black dresses with floral print, this time from the same designer, Dries Van Noten. Queen Letizia was photographed in the dress on Nov. 29, 2019 while Melania wore the same outfit on Dec. 13, 2019.

Melania has also worn outfits similar to those worn by former first lady Jackie Kennedy. Her inauguration outfit was inspired by Kennedy’s fashion. The color resembled Kennedy’s inaugural outfit and the design matched one dress Kennedy wore in 1962.

Melania was mocked for plagiarizing Michelle Obama’s speech at the Republican National Convention in Cleveland on July 18, 2016. However, Meredith McIver took the blame for it, and claimed to have included parts of Obama’s 2008 speech. She stated that she meant no harm, and when she offered to resign, Trump rejected it.

In December, Melania was once again under fire when many saw that her signature was almost identical to her husband’s.