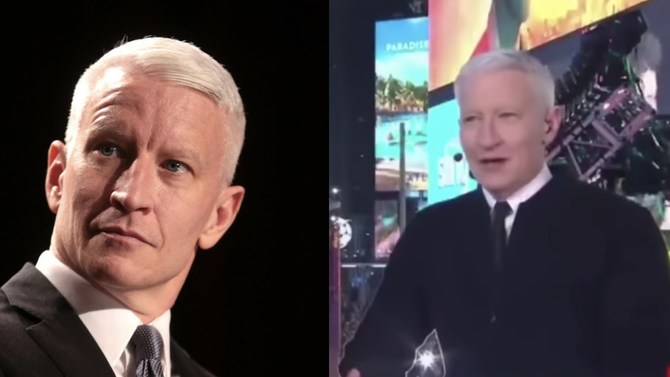 The hosts of CNN downed shots of tequila on air during the New Year's Eve coverage in Times Square while a reporter jumped with a drag queen dressed as a mermaid into a bath of rum.

Cooper also recalled his late mother, Gloria Vanderbilt, and wondered how she would answer in an interview if she was asked about who had the 'biggest' manhood in Hollywood.

He recalled that both he and Cohen were at backstage when the personal question was asked. It was before going on Cohen's interview show. The hosts were downing their tequila shots and loosening up their commentaries.

Randi Kaye, a CNN correspondent, was also reporting live at a bar in Key West, Florida when she joined a drag queen in a bathtub full of rum. She had chanced upon what she stated as the 'queen of the sea' and carried out an interview before she jumped into the bath.

She told viewers, "I don't think I've ever seen a tail so huge."

The drag queen then stated, 'that's not the only thing that's huge here, honey', which shocked Cooper and Cohen.

With Cooper's earlier discussion with Cohen, he tried to censor how he remembered the question.

A tipsy Cohen states, "He's not going to ask me who's got the biggest bleep... of anyone I've ever been with."

Cooper then clarified the exact quote stating, "She turns to me out of the blue and goes, 'He's not going to ask me who's got the biggest c--k in Hollywood, is he?' That's what she said."

Some Twitter users felt disbelief at the word they just heard come from Cooper. Cooper then apologized for using the 'C' word on air. But some were also forgiving of the two hosts gone wild despite them having to make a double-take due to the manhood references stated.