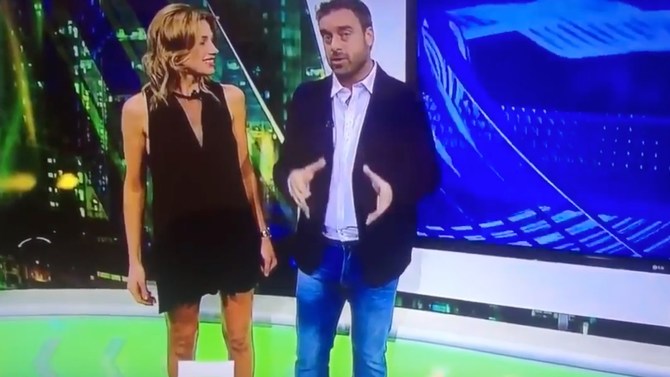 Over the years, viewers have witnessed a number of wardrobe malfunctions on live TV, or while attending concerts. In Brazil, a Fox Sports presenter became the latest in a long line of victims of wardrobe mishaps. Viewers were keen to note the embarrassing moment, and some even had the time to record and post the clips on social media, and they quickly went viral.

Alina Moine has been part of the Fox Sports team in Brazil since 2004. During that time, she has risen to become one of the best presenters in the country. However, her bright career suffered a slight blow during the network’s preview of the Rio de Janeiro Olympics.

Moine was having an animated conversation with her co-host, Maxi Palmer, during the Olympic preview broadcast. The blonde bombshell was wearing a short, sleeveless, loose black dress. As she raised her hand to her face, her dress got caught in her hand, and it lifted up. Fortunately for Moine, and the station, she had donned on a pair of skin-colored underwear.

She played it cool, and like the professional she was, continued with the discussion without missing a beat. Her co-host did not even seem to notice the spectacle, adding more points to Moine’s pro status. For the rest of the segment, she kept her hand firmly on the dress, holding it down.

In the time she has been with the network, Moine has always been a favorite with the female viewers. She is always keen to share where she gets her on-screen dresses, something that is not common with other presenters.

Also, the Argentinian blonde is no stranger to showing off her body. Apart from her job at Fox Sports, she is also an avid climber and part time model. Her social media pages feature a host of sexy photos. There are a number of bikini and semi-nude photos, and many viewers were obviously hoping for more than a peek at her underwear.

However, despite the hordes of viewers who enjoyed the view, others were quick to criticize the producers. They claimed that the segment had been pre-recorded, and that the producers had either overlooked the malfunction, or decided to use it to boost ratings. Either way, they reasoned, it was an exploitative move.