On Sunday, actor Omari Hardwick felt the wrath of the #MeToo movement as he stood on stage at the NAACP Awards on Sunday and gave singer and actor Beyoncé a peck on each cheek. In a clip released from the 50th NAACP Image Awards shows the actor from “Power” kissing the famous singer twice, once on each cheek, while she is on stage at the award show.

When Beyoncé arrived on stage to accept the coveted Entertainer of the Year Award, Hardwick used the opportunity to give the superstar singer a hug and his kisses. 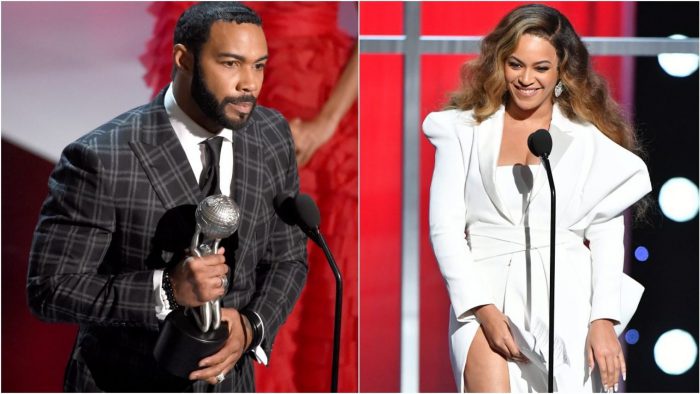 While the kisses were given, Beyoncé’s husband, rapper Jay-Z was just a few feet away. The kisses were simply an appreciation of all she has achieved and done, but while the first kiss was fine – it was the second kiss, which came after the hug, that made fans and audience members very uncomfortable. To them, it seemed like Hardwick was trying to get something extra from the singer.

“2nd kiss was unnecessary & uncomfortable. Don’t do that again. We woman so often get touched, kissed, groped & poked in instances exactly like this (at an event, at work, etc.). We don’t like it. It’s time to no longer let these moments of discomfort slide.”

This Twitter user was not alone. Many people rushed to Beyoncé defense to use this as a teachable moment so Hardwick – and other men like him – don’t try to take advantage of women when they feel they have some power over her.

Instagram users flooded Hardwick’s page with the “bee” emoji because Beyoncé is considered the Queen Bee. They also made it clear that they would not stand for such treatment of the superstar.

One outraged Instagram user wrote, “This is why the #MeToo movement is important. No matter how famous and powerful a woman is, there will always be some inappropriate man who feels like he has the right to take your manner and generosity as an invitation to make you uncomfortable. You disrespected your wife, your children, Beyoncé and Jay-Z and need to apologize.”

While the public is outraged that Hardwick seized the opportunity to kiss and touch Beyoncé, the superstar singer and her husband, Jay-Z, have not issued a statement. They usually stay out of such drama and instead focusing on their work. Hardwick, although contacted numerous times by E!, has not issued a statement and neither has his representatives.

Other people don’t think it is such a big deal. One man wrote: “The fact Omari Hardwick is trending for “kissing” Beyoncé proves that: 1. There are a lot of people with an unhealthy obsession with Beyoncé. 2. Most people, celebrities included, still have awkward interactions with people they admire.”

A woman wrote: “I don’t presume to know how Beyoncé feels but…ughhh that Omari Hardwick shit reminds me of encounters I’ve had with some men. Then you don’t want to say anything because then people will look at you like you’re overreacting, so you just suffer being uncomfortable.”

What do you think?