A high school teen's senior pictures went viral for a shocking reason - a naked man standing in the background.

Jillian Henry posted two of her shots on Twitter, which showed her posing in a river. In the first shot, her face was turned away from the camera and in the second she was seen laughing at what she seemingly noticed in the background while posing in the previous shot. 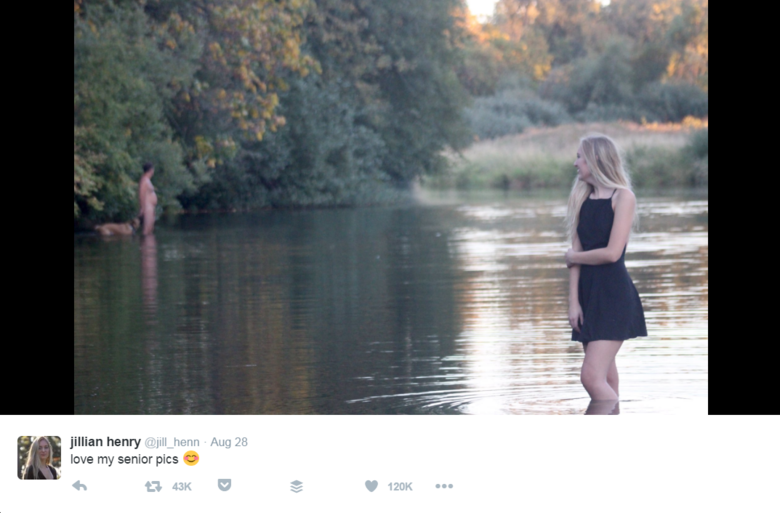 In the background, a man was enjoying the nice weather by standing around with his pants off. The shocking photos quickly went viral, with many expressing amusement at the unexpected photobombed.

"Dude just enjoying life with a nice naked walk with his dog to the lake how was he to know there would be a girl creeping on him lol they both had fun with this and y'all know it," one reader commented on the site's Facebook page.

"Who walks into the middle of a stream anyway to have a senior portrait taken??" another added.

In a similar story, an Indiana teen made headlines for getting a college degree before even graduating high school.

Raven Osborne told WABC that she set her sights high and ultimately was able to get a college degree weeks before her high school graduation. The 18-year-old took a succession of courses at Purdue Northwest University beginning in her freshman year of high school.

"Being that I was still in high school, I still had the support of my teachers and if I ever need any help with my math work or anything, I knew I could go to them," she said.

"Focus is very important and um sometimes it's easy to lose that focus because people tell you you're not normal and things like that, but I hope that everyone would just ignore those comments and just keep your eyes on your goals."

Osborne credited her mother with supporting her, as well as her teachers.

"When she had questions we tried to accommodate her with our answers, but she did the work and she earned it," Purdue Northwestern University Chancellor Wes Lukrosas added.