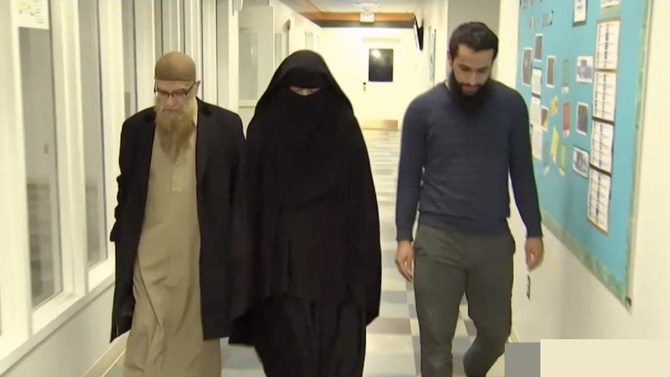 The Zahr family was looking forward to meeting the newest member of the family at the Inova Fair Oaks Hospital in Fairfax, Virginia.

Ahmed Zahr, the father, was expecting his sister and mother to arrive at the hospital during visiting hours, and they made their way to the third floor just as the visiting hours were drawing to a close.

However, they were confronted by a security guard before they got to the baby.

Arwa Zahr, recalling the incident, told News4: “He screams and he says, 'You're not allowed to be here!' And then he said, 'You know, you look scary.’ I was shocked, like, 'Did he say that?'"

The family believed that the guard was talking about their niqabs, the full black veils Arwa and her mother were wearing, showing only their eyes.

They were told to go back downstairs. When Ahmed found out what had happened, he called out the guard for being disrespectful. The guard then called the shift supervisor, and the situation escalated.

Ahmed said, "We tried to explain to [the supervisor] our side of the story. He looked at my mother as she was trying to explain what happened, and he told her, 'Close your mouth or I’ll kick you out.'"

The shift supervisor then called police.

"It was surprising to me. First of all, we weren’t threatening in any way. No one had done anything," Ahmed said.

Ahmed maintained that his family had never been subjected to such abuse, saying, "Just to be treated like that just because of the way you're dressed. We're been living here for, you know, 20-plus years. I haven't witnessed discrimination to this extent."

Inova sent a statement to News4:

“Inova respects and values our diverse patient community and believes that all patients have the right to a respectful, safe environment, free from all forms of discrimination. We hold our team members and contractors to the highest ethical standards, supported by a strict zero-tolerance policy against discrimination of any kind.

We are reviewing the family’s concerns and we continue to look for opportunities to better manage these situations in the future.

Inova’s senior leadership values our longstanding relationship with the family and has extended an invitation to meet in person.