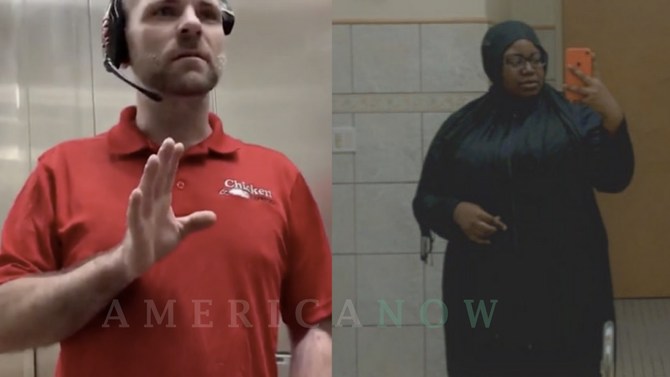 Stephanae Coleman, an employee at Chicken Express, shared a video of her manager asking her not to wear her hijab to work. She claims that she was then sent home after she refused to take it off.

In the video, the manager of the 1212 Blue Mound Road branch can be seen admonishing the 22-year-old employee. He stated that she couldn’t wear her hijab because it wasn’t part of the uniform.

In one of the videos, he can be heard saying, “Your job is your job. Your job has nothing to do with religion.”

In another video, he states, “The job requires a specific uniform. [The hijab] is not a part of the uniform; you as a paid employee cannot wear it.”

Coleman, whose Twitter name is Folake Adebola, converted to Islam in August, and started working at Chicken Express in October.

She tweeted about the incident, “I converted to Islam not too long ago and I started wearing my hijab, I went to work today and was kicked out because my hijab was not apart the 'dress code' apparently and I wasn't allowed to wear it. Don't come to the chicken express in Fort Worth!!”

In another tweet, she stated, “This is discrimination at its finest! I will not tolerate this at all.”

She continued: “I told my manager that I am Muslim and that I was waiting on my hijabs to come in. And everything was cool until it was brought up again between him and another employee.”

“Once I clocked in, the manager said 'Take off anything that doesn't involve Chicken Express,' which I knew he was talking about my hijab,” she told CNN, “So I didn't react, I just went to the back and took off my jacket and my purse. Five minutes later, he called me into the office telling me that I have to take it off because it's not a part of the work uniform.”

She stated that when she went back to work, she faced even more discrimination.

“A lady who I worked with today was making racists comments AFTER the store owner left,” she said, adding, “So I walk behind the counter and an employee is talking about me to another worker calling me a fake Muslim and that the Muslim community should hate me. So instead of saying something I let her talk. She continued on to say that there is no such thing as black Muslim women. And laughed at me while I was adjusting my hijab.”

She contacted the Council on American-Islamic Relations (CAIR) for advice about filing a lawsuit. Her case was filed with the Equal Employment Opportunities Commission.