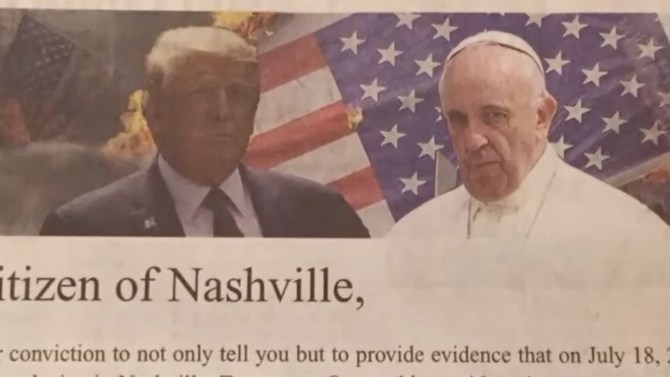 On July 18, an ad in the Tennessean newspaper announced that “Islam” was going to launch a nuclear bomb in Nashville. The full-page ad was in the Sunday print, and a second one ran on Wednesday, but did not mention Islam.

The ad was slammed as bigoted, and Michael Anastasi, Tennessean Vice President and Editor, stated that the newspaper was launching a full investigation into how the ad appeared in print.

Sabina Mohyuddin, executive director of the local American Muslim Advisory Council, slammed the ad and called it a setback for the Muslim community. She stated that she was suspicious of the Tennessean's explanation and announcement that it was investigating the incident, and worried that the ad could incite acts of violence against the Muslim community in Middle Tennessee. "Obviously this is very dangerous against our community," she said. "It makes you think that if you want to write an editorial and they won't publish it, then you can pay to have it published with an ad. If this was a white nationalist organization, the KKK, or making racist remarks, or anti-Semitic remarks, would the Tennessean publish it? They wouldn't have, that's the truth. They're saying they're going to investigate it and it didn't meet their safeguards. But how do we view attacks against the Muslim community? What kind of speech has been deemed acceptable against the Muslim community?"

The ad space was bought by The Ministry of Future for America, which misrepresented the ad as a rambling open letter to the "citizen of Nashville."

Jeff Pippenger, a member of The Ministry of Future for America, wrote in an email: "We are a small ministry based in Arkansas that focuses our message based upon the United States as it is represented in Bible prophecy. The Tennessean is the only place we paced the ad, and it was simply our ministry that accomplished the ad."

The ad stated: "Bible prophecy specifies that Donald Trump is the final president of the USA. President Trump has been typified by many biblical leaders and is marked in God's Word."

"Nashville was not the only city Ellen G. White identified would be struck by catastrophe," the ad continued, "Over a hundred years ago, she spoke of the time when the 'great buildings of New York City' would be destroyed.'"

The ad was also in the digital version of the newspaper, and was slammed on social media, with many asking how the copy made it through editing and into publishing twice.

Anastasi did not offer an apology for the ad, but wrote in a story: "Clearly there was a breakdown in the normal processes, which call for careful scrutiny of our advertising content. The ad is horrific and is utterly indefensible in all circumstances. It is wrong, period, and should have never been published. It has hurt members of our community and our own employees and that saddens me beyond belief. It is inconsistent with everything The Tennessean as an institution stands and has stood for."