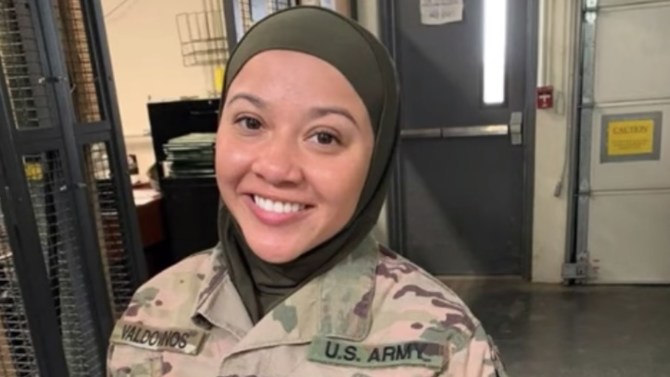 Sgt. Cesilia Valdovinos told Yahoo Lifestyle that her military service became a source of pain after she was granted approval to wear her hijab with her uniform in June 2018.

She said, “I got called a ‘terrorist.’ I got called ‘ISIS.’ I hear comments that I’m the reason why 9/11 happened. There’s a lot of anger and animosity.” Valdovinos, who converted to Islam in 2016, stated that she reached her breaking point when her commanding sergeant allegedly forcibly pulled her out of rank and made her remove her hijab in the presence of her colleagues.

In an email to the Military Religious Freedom Foundation (MRFF), she wrote: “I felt embarrassed and religiously raped in a sense. My religious preference is only to unveil in front of my husband in the comfort of my own home.” The MRFF took up her case. On March 7, she filed an official complaint with the Military Equal Opportunity Office (MEO), but the complaint was later deemed “unsubstantiated.”

Speaking to the Army Times, the senior noncommissioned officer claimed that Valdovinos’ hairstyle underneath the hijab was out of regulations. However, Valdovinos maintains that she was never asked about her hair, and that it would have been impossible to see the hair underneath the hijab.

Valdovinos’ brigade officer, Col. Zinn, said in a statement that the commander’s inquiry into her allegations “concluded that the senior non-commissioned officer acted appropriately by enforcing the proper wear of the hijab, in compliance with Army Regulations.”

Valdovinos claims that after the decision was made, she was demoted to specialist, reducing her pay by around $1,300 a month. She added that after her story went public, she and her 7-year-old daughter have been endlessly harassed. She said, “I was getting messages on Facebook from people that I didn’t even know, that if they ever see me they would kill me, and threatened me with acid attacks,” adding that she has been told to “go back to where she came from,” and yet she’s from Lodi, California.

The MRFF is planning to file a federal lawsuit against the U.S. Army on Valdovinos’ behalf, citing violations to her civil rights in what it considers as “blatant Islamophobic harassment, bigotry and prejudice of the worst type.”

The MRFF hopes to gain the help of Congresswoman Ilhan Omar, one of the first Muslim women to ever make it to Congress as an elected member. However, Omar has not yet responded to their requests.