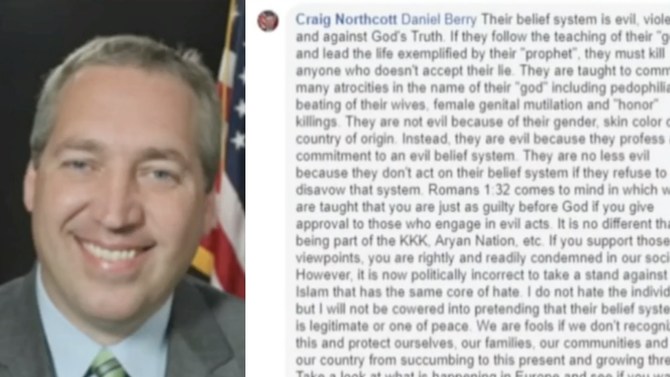 A Tennessee district attorney is declining to apologize after Muslim leaders reprimanded him for sharing resentful Islamophobic views in a series of social media posts.

Coffee County District Attorney Craig Northcott is now being called to resign by Muslim advocacy groups after Northcott posted statements on his Facebook account portraying Islam and all Muslims as intrinsically “evil” and “violent.”

The Council on American-Islamic Relations declared Northcott “clearly unfit” to work as a district attorney because of his shameful beliefs.

In response to the controversy, CAIR’s government affairs director, Robert S. McCaw stated, “Anti-Muslim bigotry has no place in the administration of justice in Tennessee or anywhere in America.”

In addition, AMAC’s middle Tennessee program manager, Sabina Mohyuddin, also published a statement saying, “When you perpetuate stereotypes and vilify another group of people, that’s not legitimate criticism, it is hate speech."

“It is exactly this kind of hate speech against Muslims by elected officials that leads to bullying in schools, discrimination, and hate crimes,” she added.

However, Northcott remains unyielding despite the backlash he's receiving.

“I am not resigning. f they figured I would apologize for calling hate in any form evil, they miscalculated. If they expect me to denounce my faith because of their tactics, they are going to be disappointed,” Northcott wrote on his Facebook account. Northcott is claiming that Islam is not recognized as a legitimate religion and that being a Muslim is no different than “being part of the KKK, Aryan Nation, etc.” He also stated that every Muslim “by definition” holds an “evil belief system whether they understand/act on it or not.”

Northcott also reportedly wrote, “There are no constitutional rights. There are God-given rights protected by the constitution. If you don’t believe in the one true God, there is nothing to protect. No one other than God has given us any rights.”