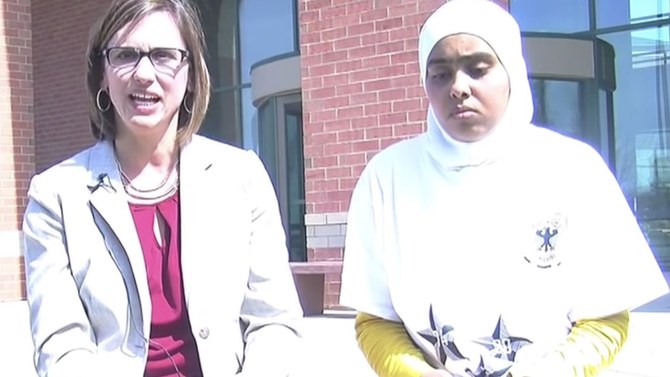 Mason High School principal Mindy McCarty-Stewart canceled "A Covered Girl Challenge,” an event aimed at celebrating religious “diversity.” Students who wished to participate would get to wear a headscarf on the day of to celebrate Islamic culture.

McCarty-Stewart sent an apology to parents, writing that the event was aimed at challenging stereotypes faced by students wearing the head scarves, but "as the event spread beyond our school community, however, we received many strong messages that made me reconsider the event's ability to meet its objectives.”

She added, "I now realize that as adults we should have given our students better guidance. After much consideration and after talking with the student event organizers, we have canceled the event."

The event was scheduled for April 23, and female students who wanted to participate would get to wear a hijab or headscarf for the entire day. They would then take time to discuss and reflect.

The event, sponsored by MHS' Muslim Student Association, was promoted by MHS' Student Activities Department. McCarty-Stewart stated that it should not have happened.

She said that the event was student-led instead of school-sponsored, adding that MHS will employ policies to ensure that any communication from the school email account would be limited to school-sponsored events.

The reactions were mixed, with some stating that the event was similar to mocking Muslim traditions, and others stating that canceling the event meant that the school "caved to bigotry."

Yasmeen Allen, whose daughter wears a hijab to mosque but not to school, stated that the family was "really upset that the school is succumbing to outside pressure of racism and bigotry toward people who are different from them."

She added, "They are American Muslims, and they have a right to be heard just like anybody else. Mason schools have failed miserably in upholding their diversity mission."

Spokeswoman Tracey Carson stated that Mason City Schools have a heavy focus on student leadership, and that numerous student-led groups often create and promote their own events.

She said, "The key there is, it's student-led and student-driven. In this case, I think, honestly, where we messed up is because adults got too involved in this process."

She added that Mason had a duty to let students practice religion freely, "But at the same time, we can't promote religion, and I think by us having the permission slip (for the Covered Girl event), by adults having sent the email, I think we crossed that line."