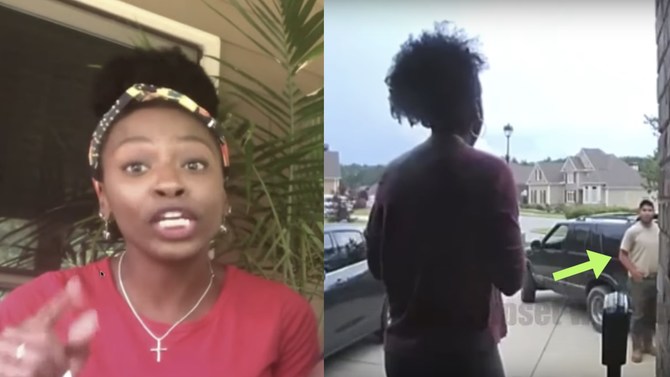 When Allison and Zeke Brown saw their contractor’s car, they were visibly shocked. The black couple had hired the contractor from Facebook Marketplace to come fix the brakes on their golf cart.

They thought he was a good hire, until he drove up to their Atlanta home and they saw the huge Confederate flag flying off the back of his truck.

The flag was such a shock for the couple, and they fired him on the spot. Fortunately, the couple’s doorbell camera captured the entire exchange.

“Hi, you know what, I do apologize, I know you’ve come from a very long way, but we’re going to use someone else,” Allison tells the man identified only as Michael.

“No, I’m beyond upset with the flag,” Allison counters.

Michael, the contractor, offers to remove the flag to appease them.

"No, you don't need to take it down. You can continue to believe what you need to believe, sir. But no, I cannot pay you for your services. Thank you, have a good day," she says.

Speaking to Inside Edition, the couple said that they had no second thoughts about firing the man.

"This is easy. We can control where we spend our money ... and it will not go to someone promoting such hate," Allison said.

"I was just a little surprised that a gentleman this young was riding around with a symbol of hate," Zeke added.

Allison was commended on social media for firmly sticking by her values and remaining calm during the entire encounter.

"What I did not want to do is promote this 'angry black female narrative' that's out there," she said.

Michael later sent a message to Zeke, which read: “I didn’t know the flag offended y’all.”

To which Zeke responded: “Yes, it is extremely offensive to anyone of color. I understand it is part of American history, but that flag stood for a time in history where people such as myself had a very bad way of life."

"Michael, I hope this small interaction causes you to do a little research on how several Americans feel about the Confederacy. I know it’s part of history, so is Nazi Germany...” he added.

Michael told Yahoo Lifestyle that he is a "redneck" and stated that the flag was just a decoration for the Fourth of July.

“My little siblings bought it from a flea market,” he stated, “I don’t support slavery and neither do my siblings. But I am not going to take it down when my siblings asked me to fly it.

"If [the family] wants to take offense, they can.”