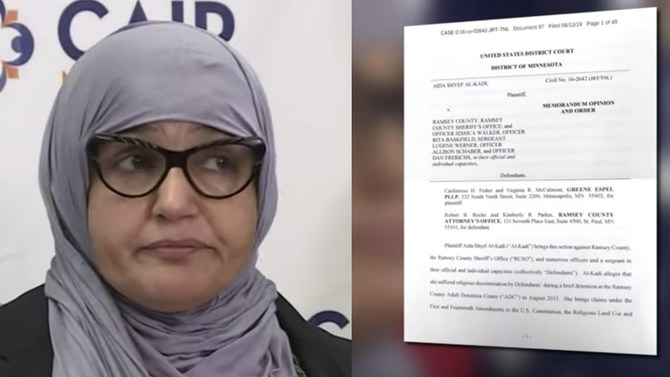 Aida Shyef Al-Kadi of St. Louis Park was taken to Ramsey County jail after she was arrested over a traffic offence. The jailers then forced her to remove her hijab and stripped her down. 57-year-old Al-Kadi described the August 2013 incident as “one of the most humiliating and harmful experiences of my life.”

Al-Kadi went to the Council of American-Islamic Relations (CAIR) Minneapolis headquarters office for help after her arrest. The office wrote letters to the Ramsey and Hennepin counties explaining the incident. Hennepin County officials responded that they were updating the policy. In 2014, they developed a policy with CAIR’s approval. This later became a statewide model.

CAIR, through the Minnesota Department of Human Rights, filed discrimination charges, but they were declared unfounded. Al-Kadi decided to take up the matter on her own. She went to the Ramsey County Law Library and studied, then filed a federal lawsuit on her own behalf (pro se).

She was referred to the Pro Se Project by U.S. Magistrate Judge Janie Mayeron.

Caitlinrose Fisher, one of the Al-Kadi’s attorneys, commended Al-Kadi’s tenacity, stating that the case “had the potential to strengthen the protections for detained women that are Muslim across Ramsey County, Minnesota and the United States.”

After six years, Al-Kadi’s lawsuit finally received a favorable ruling. In mid-2019, Judge Tunheim ruled that the jailors had failed to comply to the jail’s policy when they forced Al-Kadi to remove her hijab without ensuring that she would not be seen without it by a male jailor.

The jail decided to settle the lawsuit with a $120K payout to Al-Kadi. In addition to the settlement, the jail has to implement rules pertaining to the treatment of inmates with religious headwear when taking the booking photos.

The county agreed to delete the digital copies of Al-Kadi’s booking photo, and to destroy all hard copies of the same. However, the county was not obligated to admit any wrongdoing on its part.

Following the settlement, CAIR’s executive director in Minnesota, Jaylani Hussein, commended the “six years of courage and determination by Ms. Al-Kadi, who has fought not only for herself, but for Muslim women to be dignified and treated with respect when they encounter law enforcement.”