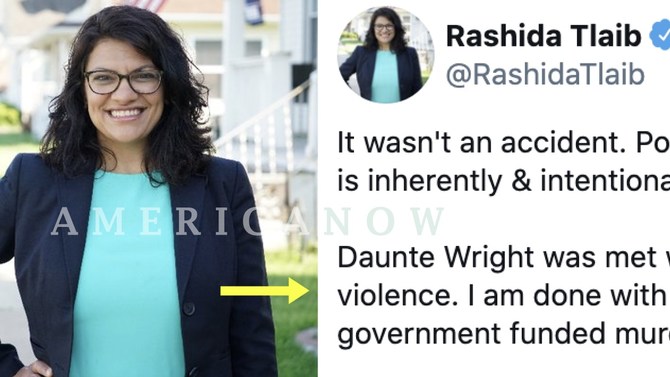 Kim Potter, a 26-year law enforcement veteran, was charged with manslaughter after fatally shooting 20-year-old Daunte Wright during a traffic stop. The former Minnesota Police Officer has since claimed that she mistook her gun for a Taser.

Congresswoman Rashida Tlaib took to Twitter to express her opinion on the tragedy, sparking controversy.

The congresswoman’s Monday tweet read: “It wasn’t an accident, policing in our country is inherently and intentionally racist,” and concluded: “No more policing, incarceration, it can’t be reformed.” Tlaib’s tweet went viral, and Chief Craig claimed that that had been her intention.

“What I’m clear about, it’s self-serving,” he said. “She wanted attention, she got attention.” “Congresswoman Rashida Tlaib was talking about the fact that we continue to see death after death at the hands of police officers with no meaningful accountability for the officers or departments involved. We’ve seen countless millions of dollars pumped into police training and half-measures, only to see the recent killing of Daunte Wright mere miles from the Derek Chauvin trial justified as a ‘mistaken’ use of a gun instead of a taser. If you can’t distinguish between a gun and a taser you shouldn’t be carrying either.

“Rep. Tlaib understands that many in our communities are concerned about public safety, but feels that more investment in police, incarceration, and criminalization will not deliver that safety. Instead, as she has long advocated for, she believes that we should be investing more resources into our community to tackle poverty, education inequities, and to increase job opportunities. We should be expanding the use of mental health and social work professionals to respond to disputes before they escalate. She believes that the only way we will all have safe communities is to invest in our people, not double down on failed overpolicing and criminalization.”