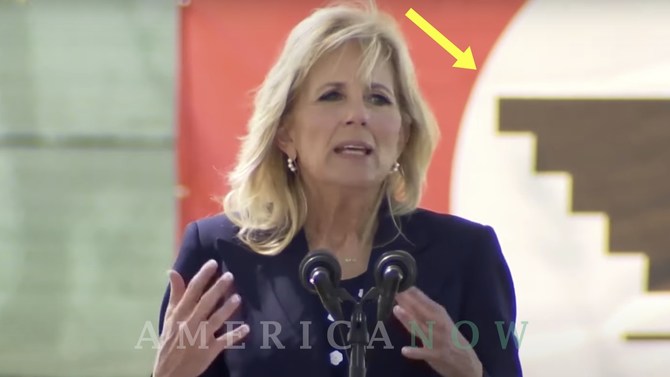 First Lady Jill Biden became the focus of netizens’ mockery after her speech at an event marking Cesar Chavez day, where she spoke unintelligible Spanish, and the background was a flag which some maintained resembles a "Nazi eagle."

On Wednesday, she tried to say “Si se puede,” which translates “yes you can” – a motto of the United Farm Workers Union.

However, some likened her blunder to a Parks and Recreation scene, while others slammed her for "pandering" to Latinos. Joanna Rodriguez, a communications director for the Republican Governors Association, tweeted: “It’s ‘Si se puede’ (Yes you/we can) not ‘Si se pwadueh.' I can’t even imagine what word she was trying to say. Seriously why even try pandering if you’re going to butcher it and not practice before?!”

Journalist Dania Alexandrino slammed the pronunciation, maintaining that it missed the mark: “Si se what???? I’m sure someone will surely tell Jill Biden ‘puadray’ is NOT a word in the Spanish dictionary. For those who are celebrating her effort, yeah NO! Very far from ‘Si se Puede’ which means ‘Yes (we) can.’ We in parenthesis because it can also be yes you can!”

Some slammed the flag in the background, claiming that it resembled a Nazi flag. The UFW symbol was designed by Richard Chavez in 1962, with Cesar Chavez stating that the Aztec eagle was used because people "know it means dignity."

The symbol, which is a crucial part of Mexico's founding myth, is based on an Aztec legend which states that the leader of a tribe was told by a god to settle where they came across an eagle devouring a snake, perched on a cactus. The city became Mexico City, with imagery associated with the legend featured in Mexican culture and on the Mexican flag. According to Miriam Powell, who’s written extensively about the UFW, Chavez researched "emblems, including cigarette boxes and Nazi flags, and concluded that the most potent color combination was red, black and white."