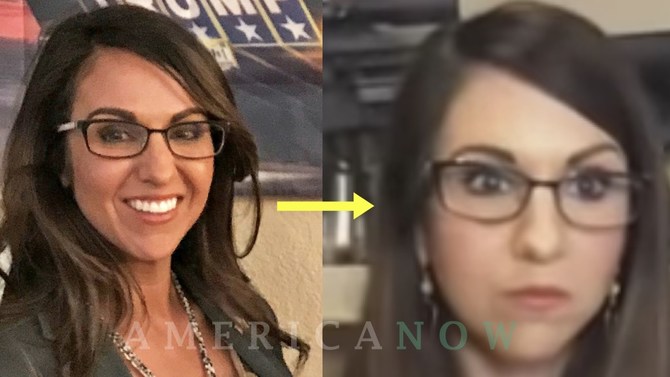 Boebert seemed to have piled various guns, including military-style rifles and pistols on a shelf behind her to serve as the background. The guns were haphazardly placed across books and butt up against a number of random items on the shelf.

The background was a point of attention for politicians and reporters watching the meeting.

Rep. Katie Porter responded to the bizarre background, saying: "I always thought my dirty dishes piled up and accumulating bacteria were the most dangerous thing in a Zoom background," and added the concerned face emojis and the hashtag, #SafeStorage. Democrat Rep. Jared Huffman, a member of the committee, stated: "If somebody wants to have a shrine to their gun fetish as a Zoom backdrop in their private life, they can do that. But this is our hearing room and at some point we will get past the Covid epidemic and we'll all start showing up in person and our safety and our ability to conduct business civilly, without feelings threatened, is a relevant consideration."

The Twitter account RoomRater, which offers unsolicited opinions about the rooms of prominent individuals as seen on virtual interviews, rated Boebert’s room at 0/10 and criticized her for improper storage of her weapons.

"Unsafe gun storage is no laughing matter. Is this Fascist fraulein really the best Colorado's 3rd CD can do? 0/10," the tweet read.

In her response, Boebert stated that the guns were not being stored, but instead were loaded and prepared to fire.

"Who says this is storage? These are ready for use," she stated. Boebert’s persona is built on trolling liberals with guns.

She is also the co-owner of Shooters Grill, a gun-themed restaurant in Rifle, Colorado. The restaurant was cited by the Garfield County Public Health Department for providing dine-in services during coronavirus lockdowns and was found responsible for making 80 people sick at a rodeo.

Boebert expressed her plan to carry her personal firearm to Congress, and was later accused by Rep. Steve Cohen of giving tours of the US Capitol to her constituents days before the riots – and she did admit to Congress that they were among those gathered outside the building on January 6.

“We saw Boebert taking a group of people for a tour sometime after the 3rd and before the 6th. … Now whether these people were people that were involved in the insurrection or not, I do not know.” Rep. Cohen told CNN. Bobert responded, stating that those claims were "false" and "slanderous."

After the riots, congress members were mandated to pass through metal detectors before going into the Capitol, but Boebert set off the detector and refused to adhere to the orders of the US Capitol officers who responded to the breach.

While she was allowed to enter the chambers, she may be facing a $5,000 fine for breaking the Capitol security rules.

Democrat Alexandria Ocasio-Cortez objected to Boebert carrying weapons into the chambers, and added that she and other congress members don’t "feel safe around other members of Congress."