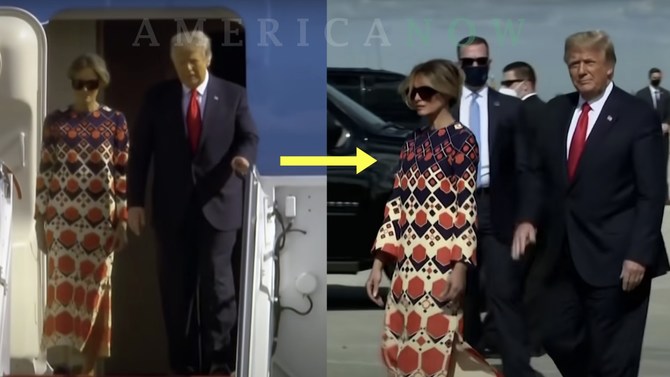 After her role as the First Lady came to a close, Melania seems to have taken it to heart, even refusing to pose for pictures with her husband.

After skipping Joe Biden and Kamala Harris’ inauguration, the Trumps flew to Florida, and as the former President waved at cameras and stopped to pose, Melania continued her brisk pace, walking directly to the car waiting for them.

A video of the incident went viral on Twitter, showing former first lady and Trump walking down the plane steps, with Trump stopping to pose for the cameras. However, Melania walked on, never breaking her strides. Comments poured in, with people writing:

“Did you see her face? @MELANIATRUMP @FLOTUS45 told @POTUS45, ‘I'm out of here the moment this plane touches down in Florida!!!’ She did not disappoint.”

“Rewatched it a number of times. Looks like Trump is slightly pushing her directing her to the car. Also he says something before that. Maybe he wanted to appear alone on the final photos. And watching Melania walk, right by at Trump's arrival in Florida...she wanted zip... of that. She is so done with him!” “I don’t wish divorce on anyone BUT i give trump and Melania less than a year .... Mark my words.”

“Anybody else think #MelaniaTrump is actually #Q in order to finally get that divorce? @melaniatrump - Princess Melania's contract expired at 12:00 noon on Wednesday - January 20, 2021. It's off to the divorce attorney.”

The couple arrived in Florida on Air Force One to stay at Trump’s Mar-a-Lago resort. Melania changed out of her somber black dress midflight, opting for an orange Gucci dress and ballerina flats.

Divorce rumors had been swirling months before the elections, with many speculating that Melania would file for divorce shortly after leaving the White House. Daily Mail reported that Melania has allegedly been waiting for Trump to concede defeat and exit the White House before ending their 15-year marriage.

Trump's former aide Omarosa Manigault Newman told Daily Mail: "Melania is counting every minute until he is out of the office and she can divorce," and called their relationship a "transactional marriage."