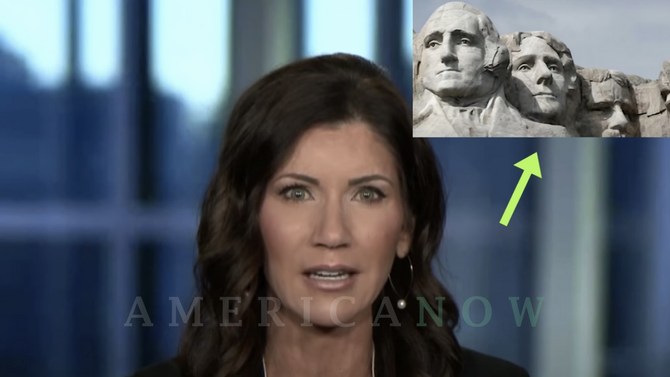 As statues of former presidents George Washington and Thomas Jefferson have been defaced, pulled down by protesters or removed all over the country, questions have come up as to what will happen to Mount Rushmore – which has the two presidents displayed in South Dakota's Black Hills.

Ben Shapiro tweeted: "So, when is our woke historical revisionist priesthood going to insist on blowing up Mount Rushmore?"

South Dakota Gov. Kristi Noem had a simple response to the tweet: "Not on my watch."

Noem’s response was retweeted over 15,000 times, and comes amidst protests all over the country that have led to the removal of statues, especially those of Confederate leaders and historical figures with racist pasts.

However, the Mount Rushmore debate goes past the slave-owning pasts of Jefferson and Washington.

Fort Laramie Treaty of 1868 granted Native American tribes ownership of the Black Hills in perpetuity, but an expedition of gold miners led by Gen. George Custer in 1874 demanded protection from the U.S. Army. Through the Indian Appropriations Act of 1876, all rations were cut off until the Lakota gave in and ceded Black Hills to the federal government.

In 1979, the U.S. Court of Claims found that the Sioux Nation was entitled to compensation worth $17.1 million from the federal government for seizing the Black Hills. In 1980, in United State v. Sioux Nation of Indians, the U.S. Supreme Court decided 8-1 that the federal government had indeed violated the Fifth Amendment and that the tribes were entitled to compensation. However, the tribes refused to take the compensation because it would mean that their legal demand for the Black Hills to be returned to them was over.

In the early 1980s, several requests asking for return millions of acres of the Black Hills to the tribes were denied, and so were bills in Congress that would have seen some of the land returned.

In 2009, efforts to settle the dispute was revived, and in 2012, the United Nations released a report stating that Indigenous land, including the Black Hills, should be returned.