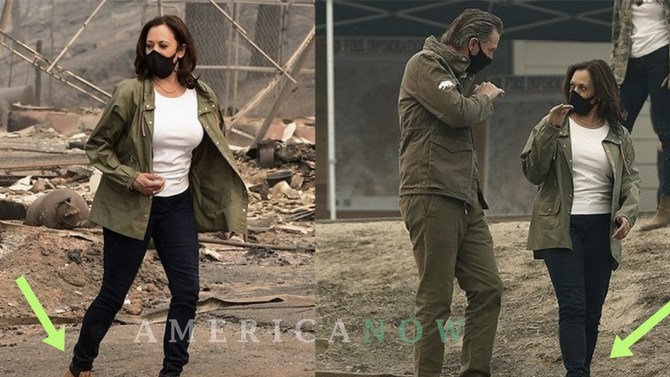 Kamala Harris took a trip to the West Coast to attend a roundtable discussion about the pandemic’s impact on Latino households in Las Vegas. Harris made a stop in California before the event to meet with politicians and discuss the state’s raging wildfires.

After visiting some of the damaged areas with California governor Gavin Newsome, Harris posted on Instagram: “I’m incredibly grateful for the courage of our brave firefighters and those who have come near and far to help those fleeing the destruction.”

As she walked through the areas damaged by the fire, many took note of her Timberland boots. Harris complete the look with a white T-shirt, army green utility jacket, dark denim jeans, and a black facemask. Many members of the private Howard alumni Facebook groups were supportive of her outfit choice, but some on social media were not so supportive.

@DCisChillin wrote: “1) She's talking bad about a black woman wearing 'Timbs' like that's odd. 2) Kamala Harris is Jamaican & Indian. Two groups who use the most spices / heat in their food of any cultures in the WHOLE world. Just say you don't like her / democrats & go.... No need to sound crazy” Author Mikki Kendall also defended Harris’ choice: “I just realized that people think Kamala Harris was pandering by wearing Timbs & I just...they've been popular for 40 years. I don't know anyone who doesn't own them...”

Political adviser and author Karine Jean-Pierre wrote “The Timbs” and coupled it with a GIF of Harris exiting the private jet wearing the boots. Las Vegas Sun reported that the event was held in front of a media audience, and that Harris criticized some of President Trump’s decisions as commander-in-chief.