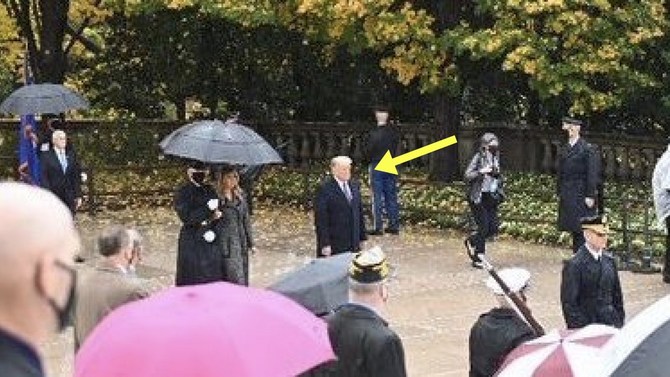 Donald Trump made his first public appearance since losing the election, and spent less than 10 minutes in public during the annual holiday honoring war veterans.

He visited the Tomb of the Unknown Soldier at Arlington National Cemetery, arriving half an hour late, which kept service members waiting in the pouring rain.

CNN showed a live split screen of Trump’s appearance alongside Biden’s, which put the president tardiness in clear display.

“POTUS has nothing else on schedule today but is nonetheless late to Arlington National Cemetery to honor veterans on Veterans Day keeping decorated veterans, their families, and others waiting in the rain, not understanding the significance of the day, hour, minute of commemoration,” journalist Molly McKew tweeted. Trump, vice president Mike Pence, staff and family members were present during the ceremony, but failed to wear face masks despite the cemetery’s explicit instructions asking attendees to do so.

“All visitors are to follow social distancing requirements and wear face coverings while on cemetery grounds,” the cemetery said in a statement ahead of the visit. “Anyone not having a face covering in their possession at cemetery entry points will not be granted access to the cemetery.”

As some slammed Trump for failing to wear a mask even as the country hits new record highs on the daily coronavirus cases reported, others were more focused on Trump’s salute.

Trump saluted the flag and the soldier’s tomb during the national anthem, despite protocol calling for him to put his hand on his heart. The US flag code stipulates that only military personnel and veterans should salute the flag during the national anthem.

All others are invited to “face the flag and stand at attention with their right hand over the heart”.

Trump is a known draft dodger who avoided serving the Vietnam War, and had never served in the military. He still insists on saluting.

Social media was also abuzz with people noting Melania’s distance from her husband during the appearance. While she may have been keeping closer to the service member who was sheltering her with an umbrella, the distance between Melania and Trump fuelled rumors that she was planning to divorce him once he left the office. Seven of Trump’s campaign and White House officials, who wished to remain anonymous, are certain his legal battles won’t change the outcome of the election.

Only a few senior staffers have been around Trump in the recent days, with many in quarantine after testing positive, or in isolation following a confirmed exposure. Others are just steering clear of the Oval office altogether, a staff member revealed.