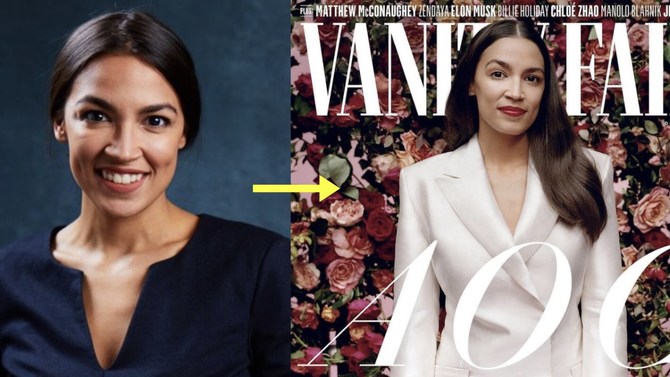 Democratic Rep. Alexandria Ocasio-Cortez is on the cover of Vanity Fair's December issue.

On Wednesday, after her interview with the magazine was published, Daily Mail released an article breaking down the cost of the outfits AOC wore on the cover story, totaling approximately $14,000.

The shoot, by photographer Tyler Mitchell, featured AOC in an ivory silk wool suit by Aliétte on the cover of the magazine. Aliétte confirmed that the outfit was from their new collection, and the Daily Mail estimated it at $1,000. AOC also wore a Loewe suit, a Wales Bonner polka-dot dress, jewelry from Mateo, a Carolina Herrera suit and Christian Louboutin heels. The report sparked backlash from some who were quick to note that the high-end fashion was a far cry from her stance as a Democratic socialist.

One tweet read: “AOC on the cover of Vanity Fair. The clothes are estimated to cost $14,000. So happy that AOC is upholding the long established hypocritical tradition of Socialists who believe Socialism is for poor while they enjoy the fruits of Capitalism.”

However, AOC was not taking the comments lying down. She quickly pointed out that the clothes she had on during the shoot were borrowed, the usual practice for clothing used for magazine and social media shoots.

She replied to Fox News anchor Laura Ingraham, writing that it was "100% worth it, would do again."

AOC added: "And I don't know if you've been in a photoshoot Laura, but you don't keep the clothes.”

She posted a subsequent tweet aimed at Republicans, writing: "Republicans are Very Mad (again) about my appearance. This time they're mad that I look good in borrowed clothes (again)."