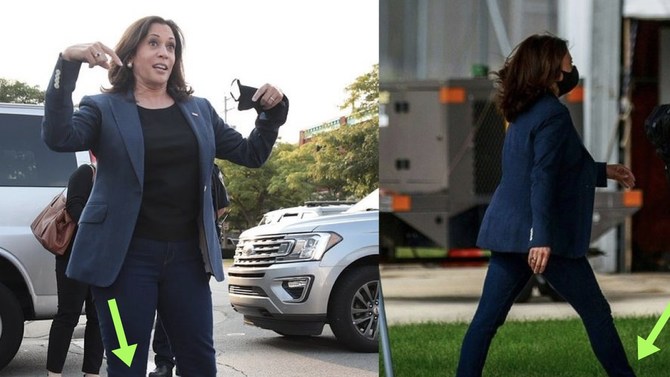 On her visit to Milwaukee, Harris was wearing what the report described as "black, low-rise Chuck Taylor All-Stars, the classic Converse shoe that has long been associated more closely with cultural cool than carefully managed high-profile candidacies."

Post reporter Chelsea Janes wrote, "By Tuesday morning, videos by two reporters witnessing her arrival had been viewed nearly 8 million times on Twitter. For comparison’s sake, more than four times the attention the campaign’s biggest planned video event, a conversation between Joe Biden and Barack Obama, had received on both Twitter and YouTube combined." In the report, which was headlined "Kamala D. Harris goes viral — for her shoe choice," Janes wrote, "At this point in a presidential campaign, every move is calculated, often to convey a sense of youth and energy and fitness to reassure voters of a candidate’s ability to handle the rigors of running the country, or helping to do so."

Harris' sister stated that Chucks were her "go-to" shoes.

"Harris has white Chucks, off-white Chucks, black Chucks, and even hinted at a sequined pair she has yet to break out on the trail," the Post reported.

The report was mocked on social media, with NewsBusters managing editor Curtis Houck writing: "This is so embarrassing. Imagine The Post doing this in 2008 with Palin, Bachmann in 2012, or in the future with Haley or Stefanik in 2024.”

"I feel like you might want to cover the fact that Kamala Harris praised an alleged rapist and his anti-Semitic father, @washingtonpost" Ben Shapiro wrote, referring to the allegations against Jacob Blake and the remarks stated by Jacob Blake Sr. on social media. "Funny how libs can gush over fashion choices of their lib favs, but if a conservative even hints at a woman’s look, we’re sexist bigots. #DoubleStandards," Trump campaign legal adviser Jenna Ellis responded.

Janes defended her report, tweeting: “'Who cares about her shoes' I see some of you wondering so politely? What’s clear in reaction to Harris and the Chucks is how much seeing themselves in a new kind of candidate — a Black woman, an Indian-American, someone who likes Chucks, whatever — matters to a lot of people."