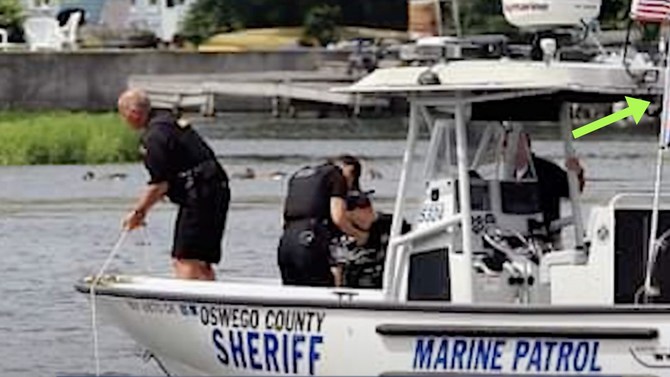 During a pro-Trump flotilla on Oneida Lake on Sunday, Oswego County Sheriff Donald Hilton was on an on-duty sheriff’s boat which was flying a Trump campaign flag, photos by Syracuse.com showed.

The first-term Republican sheriff has since defended the flying of the flag as an acceptable show of support for those at the rally, as well as the president’s “unwavering support for law enforcement.”

In his blanket defense posted on the sheriff’s office Facebook page and later in a statement to Syracuse.com, Hilton failed to acknowledge that he was also on the boat.

“During the event, one of the Oswego County Sheriff’s Office boats flew an American Flag with an image of President Trump,” the Facebook post read. “This flag was flown to show support of the citizens who were attending this event and to show recognition to the ‘President of the United States’ for his constant support for Law Enforcement.”

The photos taken by Syracuse.com and others show Hilton on the boat, but he did not respond to the repeated requests for comment. Weatherup did not respond to inquiries about the Hilton’s presence on the boat.

Democrat Tom Drumm stated that county officials have failed to comment on Hilton’s presence on the boat.

“It certainly looks like the sheriff,” Drumm said, and added that Hilton needed to acknowledge that he had crossed a line by flying the flag. “To me, it’s a slap in the face to the taxpayers.”

Drumm maintained that he had no problems with the sheriff, stating that they had worked together for a time, securing federal funding for various county initiatives. He stated that their collaboration was “fine and supportive.” While it is well-known that Hilton is a Trump supporter, Drumm maintained that this was beside the point.

“This caught me off-guard,” he added, referring to the flag incident. “It caught everybody off-guard.”