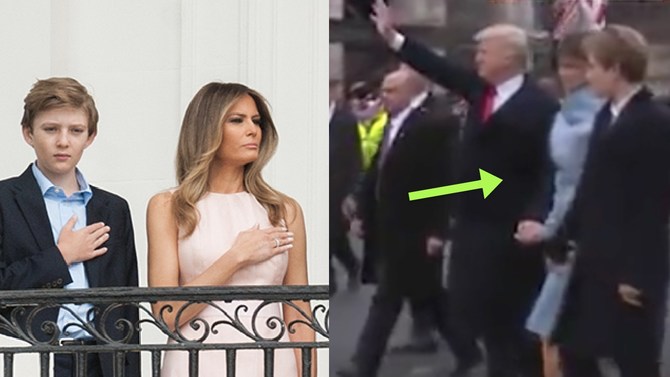 As the coronavirus pandemic rages on, news about Melania Trump have been scarce. Last week, she was pictured at a fire station handing out lunches, masks, and hand sanitizers.

FLOTUS was forced to abandon her “Be Best” campaign because of the pandemic, since schools were closed due to state lockdowns.

While at the station, she said: “The president and I will continue to support our dedicated firefighters, police members, EMS personnel and other critical first responders who put their lives at risk each day in order to keep our neighborhoods safe.”

Melania is not known for her direct involvement in White House politics.

In 2017, a video caught Melania’s attempt at public affection towards Barron, who was 12 at the time.

Barron was walking with his parents through a crowd during his father’s inauguration.

As they waved to voters, Melania tried to hold Barron’s hand but he snatched it away as soon as she grabbed it.

Melania was seen straightening her son's tie and patting his head later in the day.

The awkward moment came before Barron was seen yawning during his father’s swearing in ceremony.

The sight caused a storm on social media when viewers noted his bored expression.

Another one commented: “Barron Trump is yawning more than I do in my macroeconomics class.”

A third wrote: “Barron Trump is laughing, yawning, and on his Gameboy. He's quickly becoming my favorite Trump.”