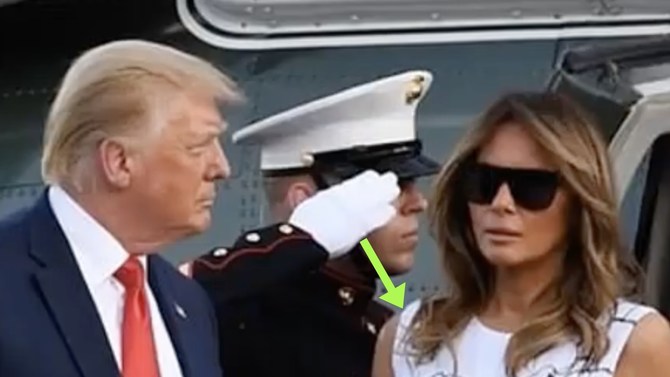 Melania Trump became the object of focus as she attended the early Fourth of July celebrations at Mount Rushmore with her husband. However, what people had to say was far from expected.

As President Trump delivered his speech to the 7,500 attendees, Twitter users were more interested in Melania’s $2,485 Alexander McQueen dress.

Several people joked that Trump had decided to draw on Melania’s dress with a sharpie.

“Donald Trump got bored and drew all over Melania's white dress with a sharpie on Air Force One,” one person wrote. “Will somebody please take that sharpie away from him! Now he's drawing on Melania's dress, ffs,” another joked.

Another person wrote: “Melania pulled a plain white dress for her evening in North Dakota and before they left Trump took a sharpie marker to it.”

Some people compared the doodle designs on Melania’s dress to “Sharpiegate,” when Trump used a large sharpie in September to an official map of Hurricane Dorian. “Looks like Melania needs #IndependenceFromTrump as well,” another person wrote.

“He gone and doodled with the sharpie all over her dress now. I thought they took away his sharpie after the hurricane incident?” wrote another.

Others focused on other trending styles Melania had worn, including the controversial “I really don't care, do you?” jacket she donned in 2018.

She was slammed for wearing the jacket at an immigration facility as her husband was fiercely criticized for his immigration policies. While people mocked the dress, Paper Magazine reported that the design was a product of collaboration between McQueen and Central Saint Martins’ students in London.

“The entire McQueen staff then hand-embroidered and stitched the sketches over a linen dress,” according to Daily Mail.