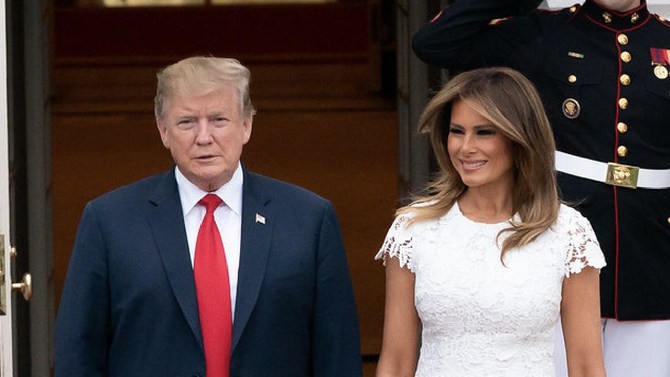 The Art of Her Deal, the new book by Washington Post reporter Mary Jordan, describes Melania Trump’s personal life, and her relationship with President Trump.

Sean Spicer, the president's first communication director, said in his interview: "Melania is very behind-the-scenes but unbelievably influential." He explained that while some people tried to tell the president what to do, Melania is not the type to do this.

According to Spicer, Trump usually listens to Melania’s opinions, and would say: “‘she is right’ and that was the end of the discussion.”

The book claims that Melania’s opinion was pivotal in getting Indiana Governor Mike Pence to secure the vice president nomination.

In 2016, Trump was not sure whether to pick Pence, Chris Christie, or former House Speaker Newt Gingrich as his vice president, but a Fourth of July weekend stay with Pence and his wife, Karen, at the Trump National Golf Club in Bedminster, New Jersey, sealed Trump’s decision.
According to the book, Melania talked to her husband a week after their stay, and stated that the Pence’s were “good people,” and that Pence "was not too ambitious.”

This conversation gave Pence a boost to the top spot.

"She played a big role. It was beyond consulting," Jordan was told by a person with direct knowledge about the process. "She thought he would be a loyal adviser, not an alpha."
Melania thought that Pence would be “content” with the vice president’s position, and unlike Gingrich and Christie, he would “not gun for the top job.”

Melania also favored Pence because of his response when Trump asked him what he thought about his competition. Pence highlighted their good qualities, but Gingrich and Christie were "total assassins" when they were asked the same question.

Melania believed that Pence’s attitude indicated that he would "stay in his lane, step aside and let Trump be Trump.”

According to a number of sources, Melania knows Trump better than any of his exes.

According to a friend of Melania’s, when the couple broke up in 1999, she did not date anyone else because she knew that the key to getting back with him was to "prove her loyalty."

A former White House official told Jordan: "People cross Melania at their own risk—and that risk is, 'off with your head.' I'm not kidding ... you are gone if she doesn't like you."