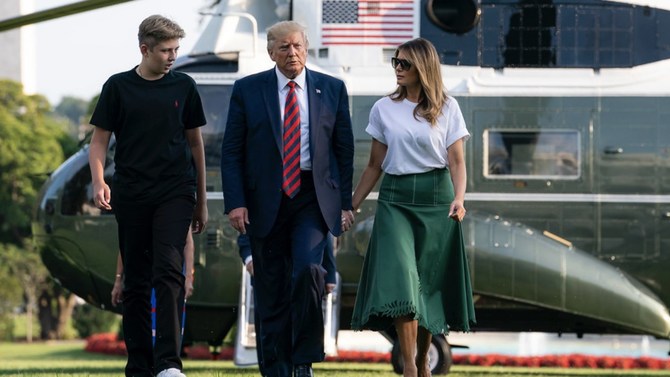 Melania has often been seen with her husband as he attends events, and while Barron mostly stays out of the limelight, he has been spotted with his parents on these trips on a number of occasions.

According to Rachel Fitz-Desorgher, a baby expert at The Baby Show and author of Your Baby Skin to Skin, the First Lady may not follow any conventional rules when parenting her son. Instead, she is likely to follow what feels right.

Fitz-Desorgher told Express.co.uk: "We can expect that, like most parents, Melania has her own preferred parenting style. She will adapt this depending on her mood, how much sleep she had the night before and whether she’s at home or out and about.”

However, Melania’s parenting style is likely to have changed in the recent times. “Teenagers crave independence but are not yet quite ready for total freedom - the ability to make good life decisions is still a few years away," Fitz-Desorgher continued. “Tell a teenager to be home by 10 o’clock and you can expect to be met with angry defiance.”

Barron rarely travels with his parents, and often stays home while Melania is traveling. If true, this means that she could be granting him more freedom the older he gets.

Alternatively, he may be kept out of the limelight to keep the couple’s parenting style under wraps. Fitz-Desorgher added: "As if it isn’t bad enough having every outfit and facial expression analysed by the world’s press, she [Melania] also is trying to navigate parenting her son, Barron, in the full, critical glare of the media.”

In addition to parenting Barron, it is believed that Melania has offered Ivanka Trump support over the years.