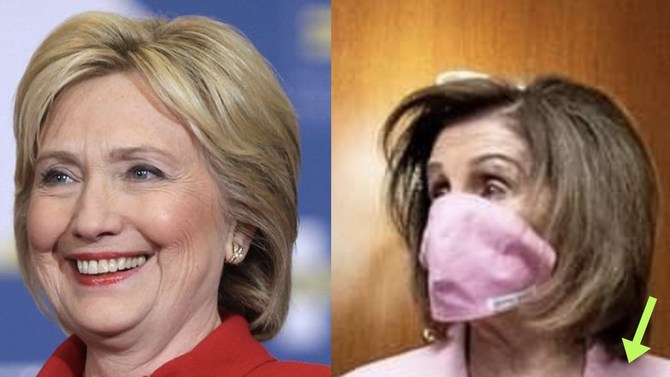 The former Democratic presidential nominee posted a photo of Pelosi on Instagram on May 13, and captioned it: “Leader of the House majority, and of mask-to-pantsuit color coordination: @speakerpelosi."

Many quickly agreed with Clinton’s statement, with one person commenting: “We salute to the mask-to-pantsuit color coordination.”

Another person wrote: “Yessss!!!! Pink power all the way."

Another one wrote: "Love seeing women supporting other women!!"

Many of Clinton’s supporters know about her fondness for a good pantsuit, which has become synonymous with her persona. During her time as first lady, she ditched the traditional gowns and skirts worn by her predecessors, and instead chose to wear a sleek black pantsuit for her official White House portrait in 2004. The outfit has since become her personal look and signature.

In her 2017 memoir What Happened, she explained that the pantsuits make her “feel professional and ready to go.” Her choice of outfit is not only convenient, it’s strategic. She is now hailed as the queen of pantsuits, having worn every color imaginable since the beginning of her career. “A uniform was also an anti-distraction technique: since there wasn’t much to say or report on what I wore, maybe people would focus on what I was saying instead,” she wrote.

“[Pantsuits] helped me avoid the peril of being photographed up my skirt while sitting on a stage or climbing stairs,” she explained. “Both of which happened to me as First Lady.”

It all started when she decided to “do and wear more or less the same thing every day," saving her from wasting time selecting an outfit every morning. As a woman running for president, she stated that she liked the “visual cue” of being “different from the men but also familiar.” However, this did not mean that she skimped on wearing makeup or making sure that her hair was perfectly done. Since the press had nothing to say about her monochrome pants, the focus shifted from her clothing to her appearance, closely scrutinizing her face during every public campaign event.

She wrote: “I’ve never gotten used to how much effort it takes just to be a woman in the public eye,” and when she calculated a grand total of "about 600 hours, or 25 days" spent on glam during her campaign, she said, "I was so shocked, I checked the math twice."