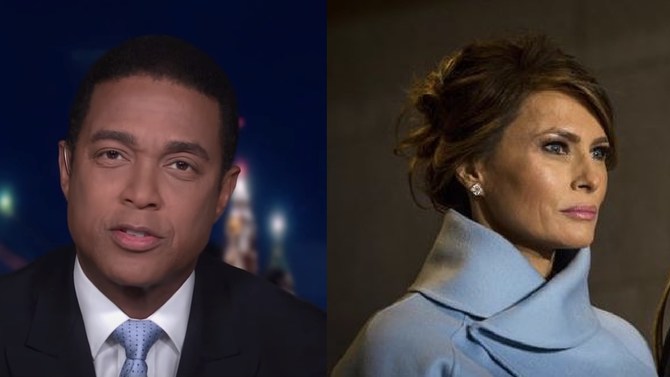 He began his now-viral rant:  “What is it about President Obama that really gets under your skin? Is it because he’s smarter than you? Better educated? Made it on his own — didn’t need daddy’s help?”

Many were quick to call Lemon out for taking a swing at Melania Trump.

BlazeTV’s Allie Beth Stuckey wrote: “Don Lemon here says maybe Trump hates Obama because Michelle is more accomplished than Melania. I can’t even imagine the outcry if the same had been said about Laura Bush. Cries of racism galore! I guess it’s cool to hate on immigrants when they’re named Trump.”

Legal analyst Stephanie Haney wrote: “Don Lemon, I like you, but you didn’t need to come for Melania. Not necessary.”

Lemon’s rant was apparently sparked by the president’s re-tweet of a post mentioning Obama and the Russian collusion hoax. “New Document Releases Seem to Point to Obama Running the Scam Investigation,” the article is titled.

It reads: “The operation was originally started to prevent Donald Trump from being president. And after he won it became an operation trying to remove him from office. This is the biggest scandal in this country’s long history.”

Days before Lemon’s rant, President Trump had tweeted: “I must admit that Lyin’ Brian Williams is, while dumber than hell, quite a bit smarter than Fake News [CNN] ‘anchorman’ Don Lemon, the ‘dumbest man on television.' Then you have Psycho Joe ‘What Ever Happened To Your Girlfriend?’ Scarborough, another of the low I.Q. individuals!”

Lemon’s rant went viral on Monday morning, and was particularly popular with the leftists.