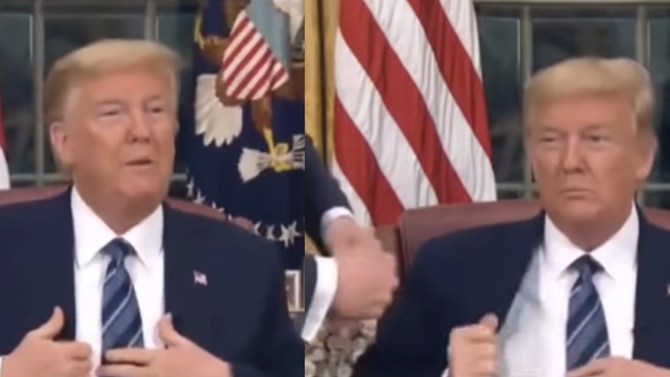 President Donald Trump received criticism after getting caught swearing into a 'hot mic' before his speech about the United States’ response to the global health crisis concerning the coronavirus.

Before the address, a C-SPAN camera candidly caught the president dealing with a stain. A voice can be heard saying “Oh, f*** - Uh-oh, I got a pen mark. Anybody have the white stuff … Do you see it? Which side is it on?”

It then appeared that he was asking his staff whether anyone had any ‘white stuff’ as heard on the clip. People claim that he might be possibly referring to Tip-Ex, or Wite-Out, in order to hide the stain.  Some also believe that he might have been demanding literally anything white, which he could just put over the ink.

Later on his speech, Trump addressed the nation, declaring a 30-day travel prohibition for people coming in from Europe. During the speech, he also stated “cargo,” would be banned, and had to immediately correct himself on Twitter following the address to reduce confusion and concern over what was regarded to be a shipping ban.

"Hoping to get the payroll tax cut approved by both Republicans and Democrats, and please remember, very important for all countries & businesses to know that trade will in no way be affected by the 30-day restriction on travel from Europe. The restriction stops people not goods," Trump tweeted. Despite the president's proactive effort to correct himself on Twitter, the pronouncement has already been criticized as confusing and disorganized after the White House later explained that many would be excluded from the ban. This is following Trump's tweet that it would not affect cargo.

In defense, Vice President Mike Pence said: "I don't think there was confusion.  We've recognized... that the epicenter of the coronavirus has shifted ... to Europe. The health team came into the Oval Office, presented that to the president, and he made that decision on the spot after hearing all sides."