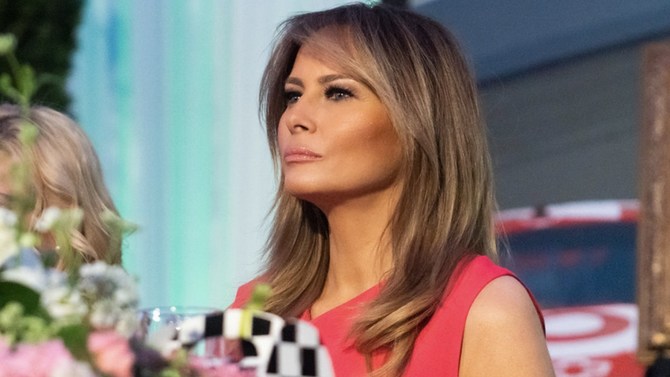 The February 2002 New York magazine edition featured the reenactment of the 1945 Victory over Japan kiss between a sailor and a nurse. In the reenactment, then aspiring model Melania Knauss can be seen embracing and kissing a surprised New York firefighter.

At the time, Melania was dating Donald Trump, who was a New York property developer. In the photo, Melania was wearing a thigh length white coat and knee high shiny boots with stiletto heels. The cover was for the Valentine’s Day Singles issues, dedicated to New York’s firefighters.

A recent article in the New York read: “Recently, the journalist Matt Haber learned something that we at New York had forgotten. The female model we’d hired was a pretty young Slovenian named Melania Knauss, who had been dating a New York real-estate developer on and off for several years, and married him a couple of years after that. We did not, at the time, expect to be working with the future First Lady of the United States. But we were.”

Daniel T. Keane, the fireman in the picture, recalled how he and Melania re-created the famous end-of-WWII photo.

Speaking to Matt Haber, he stated that they had to do “a couple hundred” takes, and Melania gave him a big kiss each time.

Keane, now a FDNY battalion chief, said: “The person who was doing my hair and makeup, they said, ‘Do you know who that is?’ And again, I don’t know any models, I really wasn’t into the scene. And they said, ‘That’s Melania Knauss… That’s Donald Trump’s girlfriend.’ And I said, ‘Oh, OK.’”

Three years later, Melania Knauss was back on the cover of the New York magazine, this time as Mrs. Donald Trump.

This comes at a time when Melania Trump is under fire for a tweet she posted after the recent trip to India with President Trump.

She wrote: “Thank you @narendramodi for welcoming me and @POTUS to your beautiful country. We were delighted to receive such a warm welcome from you and the people of India!”

The critics were quick to comment, and some read:

“You were so delighted that you didn’t eat the specially prepared vegetarian menus which were lovingly prepared for you. Strange way to show your delight!”

“Is there such a thing as a @twitter stutterer? How many times is DESPERATE @MELANIATRUMP going to send out SAME TWEET, in FAILED ATTEMPT to DISTRACT FROM THIS (BTW, not even phoney 'thoughts and prayers' from her re: #coronavirus)...”

However, some defended the first lady, with one commenting: “We love you first lady and president Trump. Your contributions in India-US ties will be always remembered.”