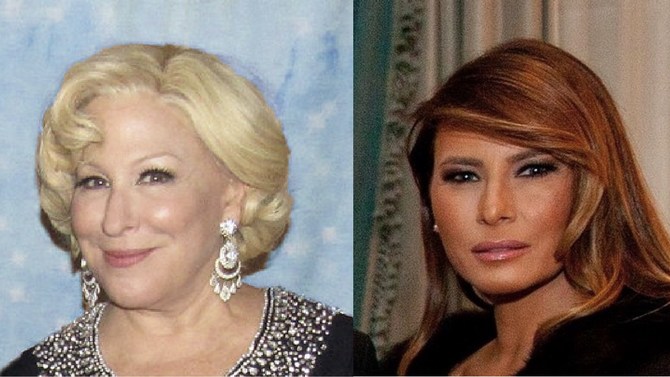 Bette Midler, an avid anti-Trump activist, actress, and Hollywood legend, recently shared a tweet featuring a very explicit poem about the Trumps. The tweet sparked was slammed by some, and hailed by others.

A poem from Melania:

Each day I'm filled with the hope

That #Donald won't be such a Dope

So I get on my knees

And say vip it out plise

As I reach for my new microscope

The tweet was quickly slammed, with one person commenting: “So now you’ve been reduced to slut shaming a woman you’ve never met because you disagree with her husband for being a Republican? Girl power.”

Some expressed their concern about the Hocus Pocus star for sharing something so juvenile. The initial response to the poem was majorly negative.

Midler has been very vocal about her dislike for Trump’s government, as she constantly posts about his deviant political tactics and fake Twitter followers.

Her Twitter bio features a black background with the words “The United States of America,” and reads, “In Mourning.”

Earlier in the year, Trump responded to Midler, calling her a “washed up psycho” after she called him out for lying about his welcome during his visit to the UK.

Trump wrote: “Washed up psycho @BetteMidler was forced to apologize for a statement she attributed to me that turned out to be totally fabricated by her in order to make ‘your great president’ look really bad. She got caught, just like the Fake News Media gets caught. A sick scammer!”

Midler has previously been slammed for body-shaming Melania, after she posted Melania’s old modeling photo and captioned it “#FLOTITS.”

She has also been criticized for her anti-feminist beliefs.