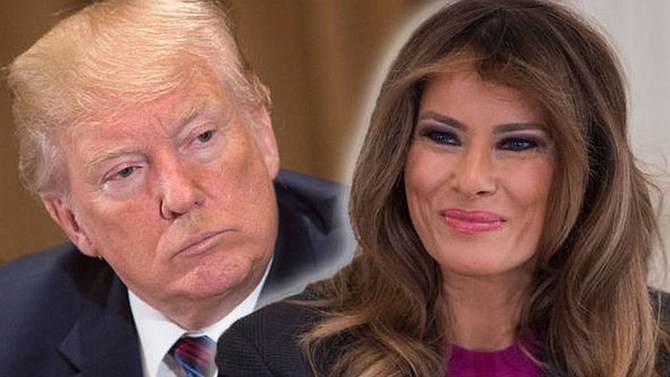 President Donald Trump and first lady Melania Trump allegedly do not sleep in the same bed, even when they are together, causing some to speculate if their relationship is in turmoil.

"They have separate bedrooms," one anonymous insider said, reports Us Weekly. "They never spend the night together -- ever."

"Melania wants as little to do with Donald as possible," the source said. "She is not interested in Donald, the presidency or anything involving him."

"Melania," the source added, "does not keep hidden from everyone around her how miserable she is."

A second source says that the couple does sleep in the same room, but in different beds.

"It's unfortunate that you are going to feature unnamed 'sources' that have provided fictional accounts," a representative said in response.

Many on social media responded with mixed reactions.

Some expressed sympathy for the first lady.

"I refuse to share my country with such a jerk of human being, can't blame her," wrote one person on Cosmopolitan's Facebook post about the claim. "I keep thinking, he had paid for her 'freedom' so, she's his slave."

Others showed their disdain.

"Don't feel sorry for Melania," added another. "She married for money and that doesn't usually end well. In her case, especially so."

While some said the allegations were significant -- arguing it poorly reflects on the president's character and attitude towards women -- others thought differently.

Both those who support the president and those who do not seemed to think it was simply an inappropriate and unnecessary matter to discuss.

"If that's true, that's sad," wrote one person on Cosmopolitan's Facebook post. "I don't think you should be posting about people's private matters like this. You make me sad too Cosmo."

"How fair is it to discuss such personal/private matters?" chimed in another commenter. "On the other hand I feel tempted to say 'of course she's unhappy with him'. But it's still sad, also for their child."

Others accused the unnamed sources of lying to further harm the president's reputation.

"I'm not a fan of the Trumps, and even i can see that this is yet another reach at trying to turn people even further against the POTUS," wrote one Facebook user.

"I just hate it when this things came up," added another. "Its like its not the president of the United state and the wife there talking about. ( not particularly in politics issue) but u know respect and being human and sensitivity."