A Georgia police department issued a warning to residents after they discovered a stun gun disguised as a cigarette pack during a traffic stop (video below).

The Kennesaw Police Department took to Facebook to share a clip of the stun gun. In the video, an officer can be seen pressing on the button of what appears to be a pack of Newport cigarettes, revealing it puts out a strong shock.

The department explained the circumstances that led to discovering the stun gun in an accompanying post.

This item was found in a vehicle during a traffic stop. While the officer was speaking to the driver outside of the car, the driver repeatedly asked to have a smoke which was located inside the vehicle. The answer was no. In the end, the only “smokes” found was the item in the video. You would be surprised at the type of weapons that have been made to look like “normal items”.

So, forgive us when we seem to act “too rigid” and “mean” when we say no to your request to “smoke” or “make a phone call” with your phone, etc... We’re just trying to make it home at the end of our shifts like everyone else out here. 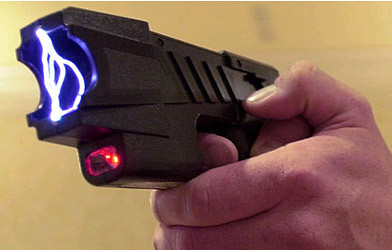 Stay safe, everyone- its another beautiful day in Kennesaw!

The post quickly went viral, with many expressing outrage over the fact that someone would threaten police officers with a weapon like a stun gun that's so stealthily disguised.

"The suspect kept asking the officer if he could smoke the officer kept telling him no of course the officer got suspicious wouldn't yall in this day and age so many people want to kill a cop I don't blame the officer but some of yall do," one reader commented on the site's Facebook page. "He wants to go home at the end of his shift. A it's the other guys fault. God bless you officer great job stay safe."

Some felt the overall political climate had led to tensions between police and citizens.

Our police go out of their way everyday to ensure our safety and welfare. Our previous President, that inappropriately used the podium of the President to falsely condemn police without the facts, based on race alone, has created a hostile environment for our police nationwide.They are husbands, fathers, wives, mothers, brothers and sisters. They want to go home alive and well at the end of the day too. If people would just follow orders, ALL of these situations would not have happened. Just sit still, shut up, and follow orders.